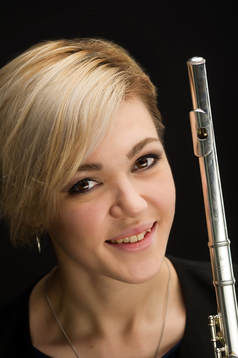 Zoya Vyazovskaya is a flutist, a soloist of Classics-Art Ensemble and Altus Flutes artist. She graduated from the Royal Academy of Music in London in 2013 having studied with William Bennett (flute). She also had a second speciality as a pianist being taught by Colin Stone. Currently, she is working a teacher in Gnessin Special Music School which is one of major music colleges in Moscow, Russia.

She is a constant member of a well-known Russian wind ensemble Classics-Art which regularly tours with virtuosic multi-instrumental programmes in all major philharmonic halls within Russia and touring through European countries including Latvia, Finland, Sweden, France.

Zoya organises music festivals and competitions. Her project "Great Flute Days" in cooperation with Galina Kuzennaya has proved itself as the biggest flute event in Russia. Among the guests there were such artists as Denis Bouriakov, Trevor Wye, Matthias Ziegler, Raffaele Trevisani, Diana Schulz and many others. Zoya and Galina run an internet flute competition "My Favourite Flute" having well-known international artists among the jury such as Clare Southworth, Krzystof Kaczka, Matthias Ziegler, Patricia Nagle, William Bennett, Raffaele Trevisani, Mihi Kim.